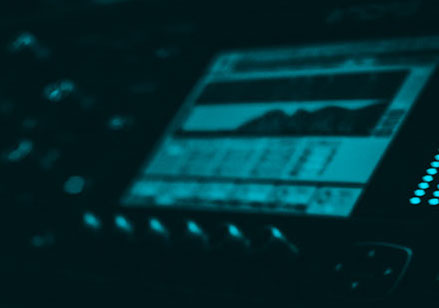 Full Finger Studio creates compositions and audio environments. Our style varies from "Spacy" New Age soundtracks to Jazz-fusion to House and Techno, and from Hip-hop to heavy Industrial/Metal. Specializing mostly in a combination between Electronic Music and different Rock and acoustic styles, either a blend or contrast between two opposites is created.

We compose for short films as well various video games, and work regularly with visual artists on interactive installations and other art projects to combine sound with image.

For most productions we use Ableton Live, for a more electronic and sound design approach. This is then combined with Pro Tools for recording guitars, piano, vocals and much more.

The finishing of a final mix-down happens in one or the other program, depending on the requirements of the project. From recording to mastering, different monitoring systems are compared. By utilizing an acoustically calibrated and treated studio environment, it is always ensured that the proper translation is reached.

Here are some of the latest projects worked on in collaboration with visual artists and designers.

Full Finger Studio is located in The-Hague, The Netherlands.

For questions or requests on mastering, mixing or compositions

send us an email at: gmstapelkamp@gmail.com.

Start a project, schedule a talk, or just say hello!

Peer to Peer experiments with social behaviour and peer pressure. A narrator will tell your story while guiding the player through the levels, where the player is the guinea pig. By making choices in the game, the player will transform their body into less or more of an individual [see image below].

To make the player aware of their body changing all the time, there are mirrors throughout the whole game which show their reflection.

'Mimosa Pudica' explores the possibility of an art/design piece having its own character. The name derives from a plant, which leaves fold inward and droop when touched or shaken, defending themselves from

harm, to re-open a few minutes later. It depicts the idea of an art work being able to preserve itself, while

raising a hypothesis of the audience feeling compassion towards it.

“Unity” is a cooperative two player meta video game. On the surface, its aesthetics and controls are familiar, although players quickly realise it challenges the linear structure of video games by breaking patterns and expectations of the medium. On a social level, it is an experiment which, through humour and satire, aims to highlight how much trust and power we give to this highly lucrative industry.

Inside Out (film Composition)

Soundtracks and sound-design for "Inside Out" a short film by Fahmy Shahin.

For more information check out:

Soundtrack made for Club Alternativa.